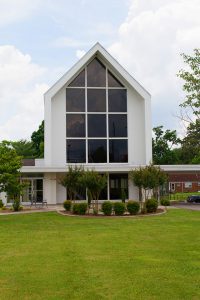 Under the direction of the Presbytery of Nashville, fifty-one people met on October 29, 1950 to form The Donelson Presbyterian Church. The new church would meet the needs of Nashville’s growing suburb of Donelson.

The congregation met in different schools and churches in Donelson until the first section of the building was completed in 1952.

Reverend Sam Fudge, pastor from 1951 to 1953, led the congregation through its early years. Rev. Fudge began what would become the congregation’s oldest active ministry of an annual evening of Christmas caroling to shut-ins.

Under the leadership of the church’s second pastor, Rev. Gordon MacPherson, the congregation started Donelson’s first weekday kindergarten in 1954.

In 1956 the Women of the Church established the Dorothy S. Davis Memorial Library with a collection of 608 books. DPC’s church library opened ten years before the Donelson branch of the Nashville Public Library and served the congregation and the church kindergarten. The library still serves the congregation as a resource for Christian learning and study.

Construction continued on the building through the early 1960s. The current sanctuary was dedicated in 1959.

The church’s growth in the 1960s paralleled the growth of the community of Donelson. The Donelson-Hermitage Family YMCA opened in 1965. J. Percy Priest Dam was completed in 1968, creating a large lake and bringing outdoor recreational areas to Donelson. The theme park Opryland USA opened in Donelson in 1972 and brought many tourists to the area.

On different occasions in the 1960s, 1970s and 1980s the church building hosted various organizations serving children with emotional, learning and developmental disabilities.

In 1993 the church decided to use part of its lawn to grow fresh vegetables to donate to Nashville’s Table, a local hunger relief organization. The Garden of Hope lasted through the mid-2000s.

The church began offering the LOGOS midweek program for children and youth in 1994 and continues to offer the program during the school year.  On Wednesday evenings children and youth attend Bible study, recreation and worship skills classes and eat dinner with adults from the congregation. During worship skills class the children practice songs for the LOGOS children’s choir, and the youth prepare to lead the church’s annual Youth Sunday.

The adult program AGAPE meets simultaneously with LOGOS and includes dinner and a Bible study or presentation.

Rev. Dr. Paul Casner became pastor in 2001 and continues to serve the congregation.

The sanctuary received an extensive renovation in 2002. During the rest of the decade the Tree of Life room and Founders’ Hall were also renovated. In the early 2010s the children’s classrooms and the youth room were redecorated and painted with murals.

DPC currently participates in many ministries to serve its members, the Nashville community and the world at large. Some of these ministries include serving as a Room in the Inn shelter and taking up a monthly offering for local organizations and charities.

The Presbyterian Women, formerly the Women of the Church, continue to meet to study the Bible and to take up offerings for charities.  The Dot New Circle meets monthly for a women’s Bible study.

All of these ministries, and many others, are dedicated to sharing the love of Christ to the community, a goal on which the congregation continues to focus after over sixty years of service.